The Town of Tequesta

Named after the Tequesta Indians, the Village of Tequesta is located along U.S. Highway 1 to the west of Jupiter Inlet Colony in northern Palm Beaches along the blue waters of the Atlantic Ocean. Back in 1955, Tequesta was the dream of one man, but over the years has evolved into an exceptional waterfront community. A splendor of shops, boutiques, and various churches call Tequesta home.

If you are looking to spend the day with breathtaking ocean views, swimming or snorkeling, try a visit to Coral Cove Park. The most prominent feature of the beach is the natural limestone which is part of the Atlantic Coastal Ridge. These rocks, as well as the reefs, are inhabited by marine wildlife, including fish, sea turtles, eels and marine worms. The beach also contains a large selection of shells for those interested in collecting. The park also contains covered picnic areas with tables, built-in grills, playground and showers for a fun day at the beach. 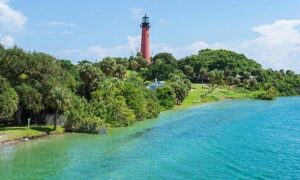